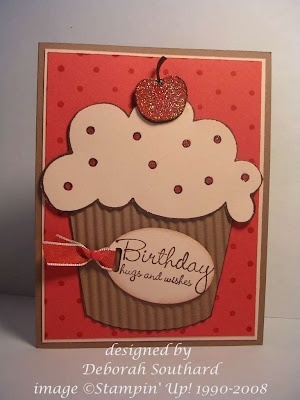 When I saw this cupcake stamp in the new catalog I knew I had to have it. Not my usual style but I do have 5 kids so there for they are invited to about a million birthday parties every year. This stamp set is intended to be a thank you card and I am sure I will use it that way sooner or late but today I put masking tape over the words when I inked the stamp then removed it when I stamped so that I could omit the words. The cupcake is paper pieced. I stamped the cupcake (or parts of it anyway) 2 times. Once on blush blossom, once on close to cocoa and one on ruby red. After I cut out the bottom of the cupcake I ran it through my rarely used (but very handy) paper crimper, I then sponged a little close to cocoa over the ridges to make them stand out a little more. The frosting part of the cupcake has dots on it that I highlighted with a ruby red marker, then a versamark pen then added iridescent ice embossing powder to give it some sparkle. I added iridescent ice embossing powder to the cherry the same way. The tag was punched out with the new large oval punch then slit punched to add a little bit of ribbon. The ribbon is held together with a ruby red brad and the edges of the tag are sponged with close to cocoa ink.

Unknown said…
This is a super cute card! I love the glittery cherry and the way you did the greeting. Makes me want a cupcake!
This is my first visit to your blog, very nice work! TFS!
August 19, 2008 at 1:38 PM

Juliana said…
So wonederfully fun!!!
I totally agree--about the crimper--neglected--but when it is needed--there is no other!!
I love how the colors work with this card.
August 19, 2008 at 2:05 PM 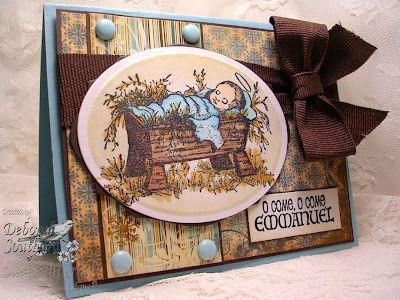 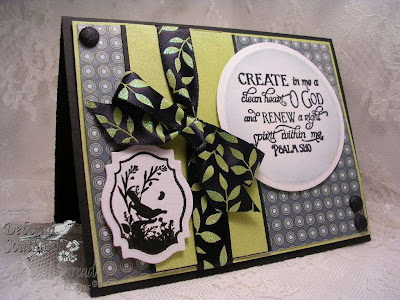